Dangling on a String

A ‘must read’ for all working in the field. 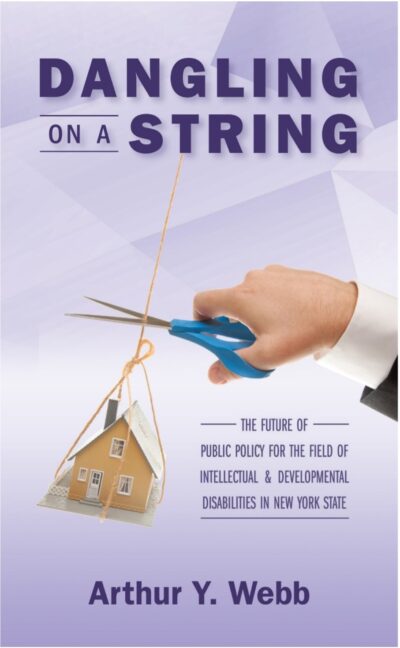 This collection of papers makes clear the weakness of public policy meant to ensure the rights of people with I/DD. Dangling on a String captures the state of affairs in New York.

Mr. Webb has done an excellent job capturing the trials and tribulations of the past ten years for the intellectual and development disabilities field.

Mr. Webb always provides our clients with comprehensive and actionable thinking and recommendations on health issues.

We see in this collection of papers that we are in a state of limbo that has existed for the past decade , which has been a detriment to any progress in public policy.

The overall collection is a major statement of how important it is to have a clear, certain, and compassionate public policy.

This book is more than a collection of writings. It really is about the flow of public policy over the past ten years: the struggle to agree on a reform agenda and the commitment to put that agenda into action. The title of the book is being used to characterize the current uncertainty of public policy for the field of intellectual and developmental disabilities. The I/DD field is facing a crisis because of the lack of clarity and predictability about the State’s timing and direction of managed care and future planning for persons with intellectual and developmental disabilities. The result is obvious and unacceptable: The field is indeed dangling while awaiting a final definitive policy statement. The book is also about the lack of leadership by Governor Andrew Cuomo and the four commissioners over 10 years in the state Office for Persons with Developmental Disabilities.

Dangling on a String will give the reader an inside look at the ebb and flow of public policy for persons with intellectual and developmental disabilities in New York State from 2011 to 2021.a

I am not sure what the tipping point is for a field to create and embrace a new future but when you are in the business of change, there will be a moment when it all comes together. As an agent of change, you have to keep pushing the boundaries and this sometimes creates tension and anxiety from the very people we count on to lead.

I discuss how a newly formed group of providers fulfilled a leadership role in the field.

Frustration during the Cuomo years

It’s baffling that Governor Andrew Cuomo did not see the value of including persons with I/DD in his broad social justice agenda.

The fight for social justice is never ending

Despite the historic signing of the Willowbrook Consent Decree that ushered in a human rights movement in the field of I/DD, the fight for social justice is never ending and takes political will to advance the cause.

Dangling presents clear evidence that the provider community is at a financial stress point that could thwart any sustainable services.

The fight for reform using Medicaid Managed Care has been in a state of limbo for ten years.

Dangling walks the reader through ten years of debate in New York on the value of managed care for the field.

The lack of leadership in the State agency

Dangling presents a clear picture of the lack of leadership at the state agency, OPWDD.

Dangling presents a collection of essays written over ten years by one of the leading experts in public policy in New York. Dangling also references professional papers funded by the ArthurWebbGroup, LTD that uses publicly available Medicaid claims data to analyze the utilization of hospital and related services. These papers add value to the main argument in the book that there is a need for reform in the field.

The I/DD field is facing a crisis because of the lack of clarity and predictability about the State’s timing and direction of managed care and future planning for persons with intellectual and developmental disabilities.

A factor in looking at the possibility of a calamity is when the capacity of the field is inadequate in meeting basic human needs, including good housing situations for people with lifelong challenges.

There is no way to ignore or avoid the political dimension of Governor Andrew Cuomo’s administration, which shaped the policy debate over the last ten years. Inarguably, the field has been in a state of uncertainty and frustration, indeed in a quagmire. Andrew Cuomo has always stood for social justice. In view of this fact, it baffles me that he did not do more the entire time he was in office to help individuals with intellectual and developmental disabilities. His marked lack of attention to advancing the reform of the I/DD field is the one thread left out of the former Governor’s whole cloth of social justice.

The pursuit of social justice endures as a vibrant driving force for the field.

The major policy of the State since 2011 has been to move all Medicaid persons into managed care. This has called for the I/DD field to learn how to tackle the issues of coordination of care, risk management, utilization of services, and more. The State wants greater predictability over spending and quality while the providers want flexibility to use resources more efficiently. A waiver will give the State the flexibility to shape and reform the I/DD field.

I caution the reader that managed care by itself is not really a reform initiative because it is more of a method to distribute public funds. Without a clear model of care and explicit outcomes, the service configuration remains in status quo. (2020)

A lesson learned is that one must shape financing to meet the reform agenda, rather than the reverse. Otherwise, we will constantly hear complaints of being under-funded and over- regulated. (2020)

It is not clear where OPWDD is taking the field. There are no broad goals or vision articulated by the Commissioner or contained in any OPWDD document.

I passionately believe that stakeholders should keep fighting for greater independence for persons with intellectual and developmental disabilities, thus assuring their exercise of civil rights and ability to be fully participating citizens.

Based on firsthand experience; the compelling point is this: The overwhelming majority of individuals who choose self-direction will get to experience their long-held dream of a life of freedom.

To be truly effective, managed care must go beyond providing the right care at the right time at an affordable level. The foremost objective has to be helping individuals fulfill their needs and achieve the highest level of independence.

As an optimist for over 50 years of professional life, I have seen the best of what humanity can achieve as well as what happens when we lose our way, in some cases in painful ways. (2017)

The major lesson learned is that consumers are right: They know what they like and don’t like; they know what works for them regardless of their abilities Not only is this the core value in our system and our society, but it must also be the driver of change. (2017)

The human spirit is wondrous but complicated because it resists change and desires stability or homeostasis. On the other hand, is the spirit of adventure and discovery. What a joy it is to behold when a person with intellectual and developmental disabilities discovers something new.